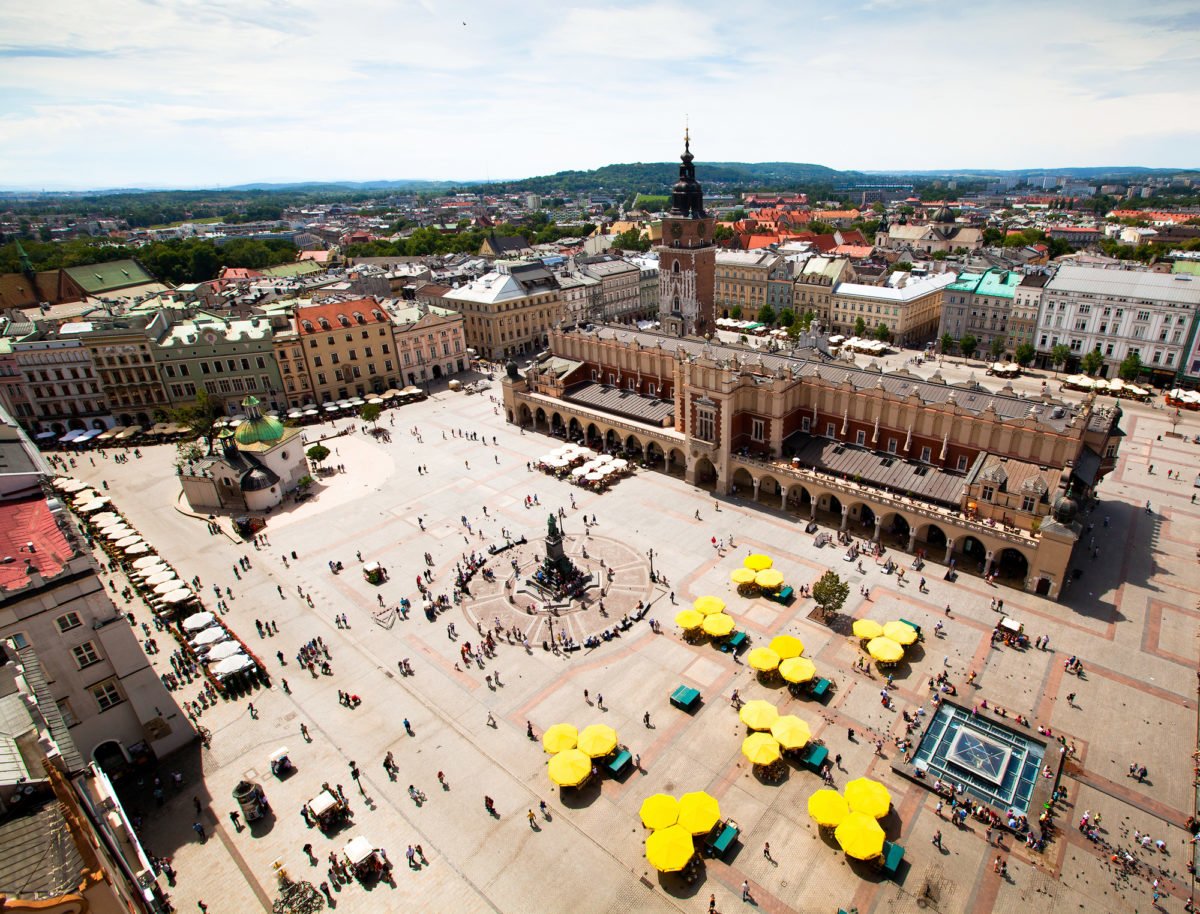 Welcome to the city of Krak

Krakow. Former Polish capital and a residence of royal family captivates with numerous monuments and beautiful nature in the heart of the city. While being on the market, listen to Mary’s Trumpet call, and while visiting Wawel Castle, remember the legend of the dragon. It’s a history lesson for the young and old. Take a tour around Krakow with us!

Visiting Krakow is a lesson of history, not only about the city itself but also about the entire country, served in a nutshell. It is the best to start tours around Krakow from the historic centre. When we have enough time for a peaceful walk, let’s look at Krakow from a distance. A walk through Planty park surrounding Old Town will give us a beautiful view of the old city walls, the Barbican and St. Florian’s Gate. Then guides from Krakow will ask us to go along the Barbican to the Market Square. On the Market a tourist cannot escape from the Krakow unwritten tradition that is feeding the pigeons. Grains can always be bought in the plastic cup from the vendor standing nearby. Obligatory points of each tour are the following: a visit to the Cloth Hall and a purchase of souvenirs, as well as hearing the bugle call from the tower of St Mary’s church, when the clock strikes noon. During the summer, we can climb the tower, but this tourist attraction requires good shape, because there are nearly 240 stairs to climb. In turn, inside the St. Mary church, we can see the famous altar made by Veit Stoss. Right next to the market, on the św. Anna (st. Anne) street, there stands a monument of Polish higher education- Collegium Maius building was erected around 1400.

Attractions in Krakow are so numerous that one trip is usually too short to watch them all. One of the most important places in Krakow is the Zamek Królewski on Wawel (Royal Castle). Apart the royal chambers, the interesting places worth exploring are also the armoury, the treasury of the legendary coronation sword of Polish kings – Szczerbiec, Wawel Cathedral and the wieża Zygmuntowska (Sigismund’s tower). In the tower, the most famous bell in our country –Zygmunt (Royal Sigismund Bell) is hanging, it was donated by King Sigismund I of Poland and hung in the tower in 1521. 10 people are needed to start the bell moving, it tolls during the most important religious and national holidays and events that are of great importance to the history of Poland. The sound can heard even at a distance of several kilometres from the castle of Krak. The last time when dzwon Zygmunta was used took place in July 2013, announcing that in 2016 World Youth Day will be held in Krakow. In Zamek Królewski it is also worth to visit the tombs in the crypt under the cathedral and royal gardens.

Walk on the mound, not only Kosciuszko

Tour groups around Krakow like to walk on Kosciuszko Mound, a conical hill dug about 1820 in honour of the national hero fighting against the Russians and Prussians. In the former capital, however, there are still three less known hills – mounds of Józef Pilsudski, Krakus and Wanda. While the first one was to be initially named the Independence mound, but in the middle of its construction, in 1935, Pilsudski died and without any hesitation it was decided to call the hill with the name of the marshal.

Multicultural traces in the interwar period

Krakow guides often talk about the large group of Jews who lived in the city during the interwar period. Every fourth citizen of contemporary Cracow was a Jew, and the group was located mainly in Kazimierz. In the district we can still see the synagogues, prayer houses and a cemetery or go to the Jewish Theatre (Teatr Żydowski).

Krakow sightseeing can be planned as well in order to participate in a well-known events that will be great especially to the youngest tourists. In September, dachshunds march is quite popular, and during Christmas – exhibition of nativity of Krakow.

While saying goodbye to Krakow, it is worth going to near Wieliczka to walk a 3-km long, underground route in the Salt mine “Wieliczka”. Tourists can see about 20 chambers there. Particularly interesting is Komnata św. Kingi (the St. Kinga Chamber) which deserves to be called a sanctuary, because relics of the saint are kept inside. In the mine, we can get to know Muzeum Żup Krakowskich exhibition displayed in 14 halls, presenting the history of the town and the mine, and the technique of salt extraction.