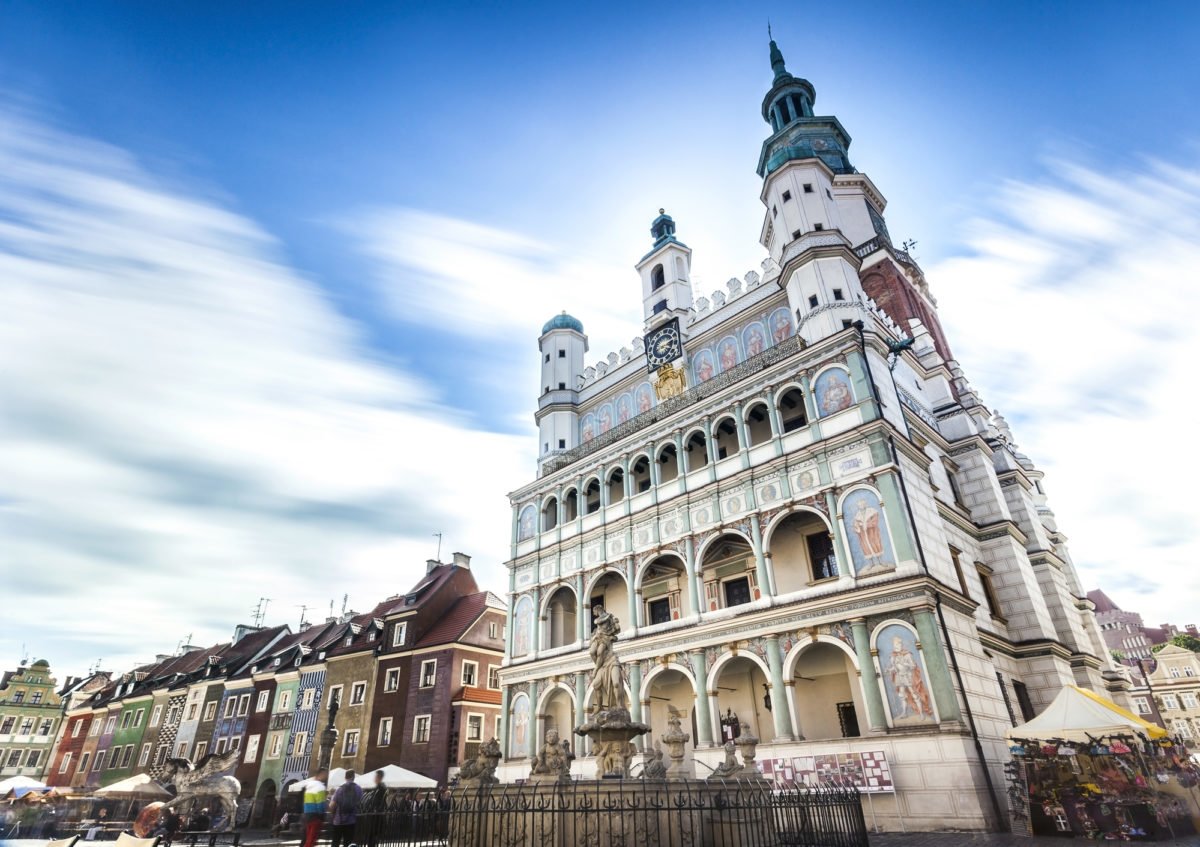 Goats on the town hall tower, international trade fairs and St. Martin’s croissants are symbols of heart of Wielkopolska. Here are the roots of Poland, as you can see also in many other places in the region. The distinctive Poznan dialect surprises visitors and commands respect for local traditions.
Poznan and not very distant Gniezno are the cradle of the Polish state. While visiting the capital of Wielkopolska, it is worth to drive car, go by bus or train, to became acquainted with the earliest history of our homeland in Gniezno Cathedral and the Museum of the Origins of the Polish State.

After being picked up from your hotel in Wroclaw, your local driver will transfer you to Poznań and wait while you discover more about the city.

You can explore the city by yourself, you can join some tours organise by locals or you can ask us to hire you the local, licensed tour guide. It is always up to you and we are flexible.

Following your time exploring Poznań, your driver will take you back to your accommodation.

Getting to know Poznan

It is worth to start Poznan tour from OstrówTumski (Cathedral Island). There is Cathedral, where first rulers of the Piast dynasty were buried, including Prince Mieszko I and the first king Boleslaw the Brave. The Poznan guides will tell tourists about the archaeological research conducted on Cathedral Island in recent years, which suggests that the site was the place where Baptism of Poland in 966 could took place, and stone baptismal bowl is located in the temple- the main element of the ceremony.
Tours often go to the Old Market Square with beautiful Town Hall and Bamberka Monument in the middle. The Town Hall at noon attracts younger tourists and young Poznań residents, presenting a goring goats that, according to the legend well-known to city residents, escaped and run on the Town Hall tower. Bamberka is a symbol of a large migration of Bamberg residents to Poznan in the eighteenth century. Near the Old Market Square there are other attractions – City Scales (nowadays bride and groom can get married there), baroque Pars church with a beautiful interior and the famous organ (church arranges organ concerts on Sunday afternoons during summer), Górka palace and Działyński Palace. Przemysl Hill with preserved remains of the city walls, as well as Franciscan church in basement of which Model of Old Poznan is presented. Imperial quarter which is in a few-minutes walking distance from the Old Market Square consist of mostly historic university buildings, the Grand Theatre, the Philharmonic hall, Mickiewicz Square with “Poznan Crosses” and a statue of the poet, and its most important element is over 100 years-old Imperial Castle built for Emperor Wilhelm II.

Going back to the nineteenth century

In the heart of the city, residents who lived here two centuries ago, left their traces. Under occupation Poles built on their own initiative Polish Theatre (still functioning), in that period Freedom Square, Raczynski Library were also built and citadel park was built on the ruins of the nineteenth-century Prussian fortress. In the past century a lot of houses on Wilda, Łazarz, Jeżyce were built in Art Nouveau style, the most famous is the building at 5 Roosevelt street where MałgorzataMusierowicz novels are taking place.